The Bulgarian Mountains are known as the walker's paradise! Thousands of kilometres of waymarked trails join a network of well maintained mountain huts and settlements, offering access to remote and beautiful alpine terrain. Ancient mountain villages, spectacular granite peaks, soft green slopes, cool forests carrying the aroma of herbs and wild fruit, quick-flowing rivers and crystal-clear blue lakes, mineral springs and bioreserves, rare plants and animals and an intact old world culture are some of the treasures of mountainous Bulgaria... 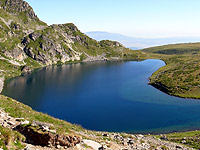 The Rila Mountains are the highest Mountains in Bulgaria and on the whole Balkan peninsula with mount Musala - 2925 m a.s.l. They occupy the prestigious 6-th place in the European "classification", preceded by Caucasus, the Alps, Sierra Nevada, the Pyrenees and the Etna volcano. The climate of Rila is determined by its geographical situation, on the border between the continental and the transitional Mediterranean climate. The lowest average monthly temperature was recorded during February on the mount of Musala - minus 11.6C...

The Pirin Mountains are comparable to the Swiss Alps and the most beautiful in Bulgaria. It is the second highest after the Rila Mountains (in Bulgaria) and the third in the Balkan Peninsula (mount Vihren 2914 m a.s.l.). Pirin is situated in the southwestern part of the Rila-Rodopi mountain range. Pirin has the typical climate of a mountain but with a well-expressed Mediterranean influence, mainly through the valleys of Strouma and Mesta rivers. This is why Pirin is the mountain with the greatest number of sunny days throughout the year. 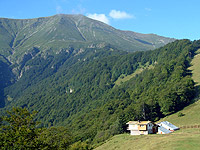 The Balkan Mountains ("Stara planina") are the longest (550 km) and the biggest of all Mountains in Bulgaria. Its range extends throughout the entire length of the country - from the Bulgarian border of Serbia to the Black Sea coast. The highest peak is Mount Botev (2376 m a.s.l.). Stara planina is the most foggy and windy of all Bulgarian Mountains. Average temperature values around the Mount Botev are January average minus 8.9C; July average +7.9C and an annual average of minus 0.7C. Rainfalls are at their maximum at May and June. 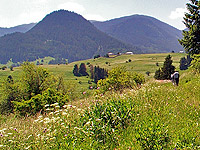 83% of the territory of the Rodopi Mountains is in Bulgaria while the remaining is in Greece. It is located in the most southern part of the country. With its highest peak - Golyam Perelik (2191 m a.s.l.) it occupies the 7-th place among the Bulgarian Mountains. The Rodopi Mountains are some of the oldest Mountains in Bulgaria. Very interesting are the Karst areas with their deep river gorges, large caves and specific sculptured forms - Trigrad Gorge, the caves Devil's Throat, Uhlovitsa, Yagodinska, the Miraculous Bridges

Many of the routes in the Bulgarian mountains have been marked in order to help the orientation of the tourists and to secure their walking during bad weather conditions. The waymarks are essential during some parts of the self-guided (or the so called "inn to inn") walking holidays in Bulgaria but also they could be of use during the escorted (guided) hiking tours especially during bad weather conditions.

Thanks to a network of comfortable mountain chalets, guest houses and camps, the visitor has the choice of more than 5,000 marked paths and routes through unspoilt nature, secure in the knowledge of a warm welcome at the end of an exciting day.

Thousands of kilometers of marked trails provide a high degree of security when moving around through the Bulgarian mountains although some routes are still not really reliable for foreigners walking alone. The four-colour marking characteristic of most European countries with developed hiking is adopted in Bulgaria too. The key colours in it are red, blue, green and yellow, and white colour is an auxiliary one. It should be known that the red marking, in principle, is for ridges. Although looking the same as style and size, black stripe between two white stripes is not a tourist marking!

Stripe-marking is used primarily, comprising three horizontal bands. The middle one is painted with the main colour for orientation, while the role of the two side bands (in most cases white) is just to attract the hikers' attention. The marks are usually painted on visible places over trees, rocks, walls of buildings etc. In recent times specially prepared metal 3-coloured tables are also used being more durable. Tables, representing arrows with the colour of the marking at the front show the direction and the last point of the route (this place is written on the table in these cases). By the huts or near crossroads there are information desks with schemes of the most popular routes and places to pass in the vicinity and also the colour of the marking, leading to these spots. Over the summits of the mountains there are sometimes pyramids made of stones for orientation in bad weather conditions. But this could be quite confusing when several trails cross each other at one point only… That is why during summer if the weather is not good enough it is recommended to use the winter marking, although this is combined with overcoming greater altitudes. 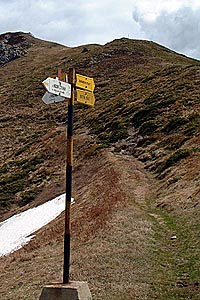 Winter marking consists of yellow-black metal stakes, at a height of between 3 and 4 metres, and indicates the comparatively safest way along a certain route in the event of thick snow cover. Sometimes on the very top of these stakes there is a little table with the serial number of each particular steak. The greater part of the routes, mainly in Rila, Pirin and along the ridges of the Balkan Mountains, have azimuth table plates in addition to the numbering of the stakes. The winter marking in Bulgaria in general is in not in a very good condition - steaks are missing or lying on the ground thus being invisible from a distance of more than 5 m.

Walking Bulgaria highly recommends the presence of at least one local mountain guide for escorted hiking trips in the alpine parts of the highest mountains in Bulgaria (Rila, Pirin and Balkan). When planning a walking holiday in Bulgaria without a local guide please always take into consideration the following risks: